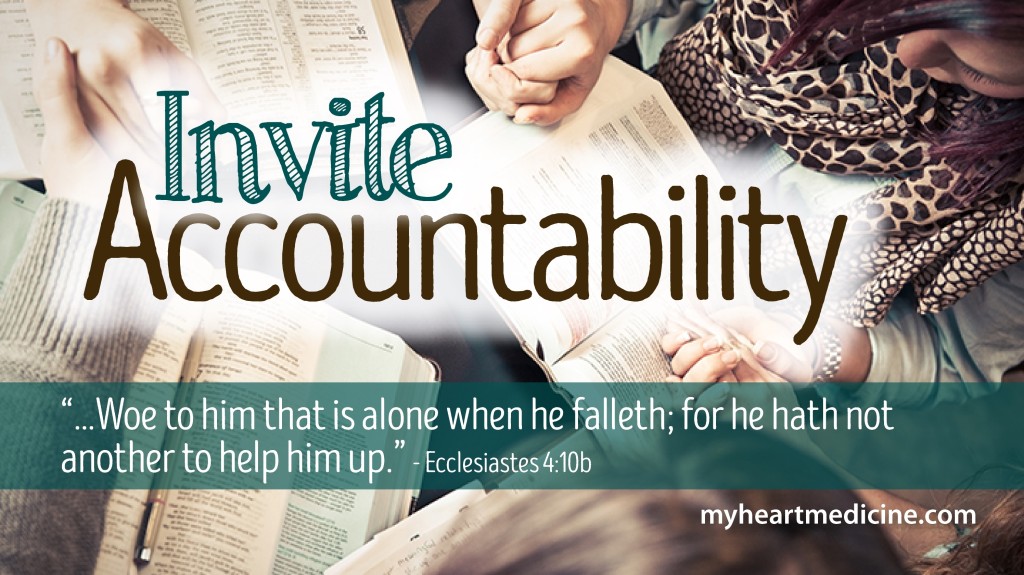 “But take diligent heed to do the commandment and the law, which Moses the servant of the Lord charged you, to love the Lord your God, and to walk in all his ways, and to keep his commandments, and to cleave unto him, and to serve him with all your heart and with all your soul.” – Joshua 22:5

“Open rebuke is better than secret love. Faithful are the wounds of a friend; but the kisses of an enemy are deceitful.” – Proverbs 27:5-6

“Take heed, brethren, lest there be in any of you an evil heart of unbelief, in departing from the living God. But exhort one another daily, while it is called To day; lest any of you be hardened through the deceitfulness of sin.” – Hebrews 3:12-13

God has filled my life with blessings, but it often seems that my blessings include added responsibility and requirement. That’s why I am so thankful that God has given me a small circle of faithful, supportive friends. They know me – the real and ragged “me” that I don’t even dare to trot out in public – and God repeatedly uses these friends to keep me in check.

As we share our blessings and burdens in our little circle, I find that God is forever working in my heart, reminding me that this “work in progress” has more progress to make.

In Joshua 22, the twelve tribes are finally making progress in the Promised Land. The tribes of Reuben, Gad, and the half-tribe of Manasseh have fulfilled their obligation to assist the other tribes in claiming their respective portions of the Promised Land (Numbers 32). Joshua gives them an honorable discharge and releases them to return to the other side of the Jordan River, where their own inheritance lies (Joshua 22:1-6).

Loaded down with the spoils of war and buoyed by Joshua’s blessing, the eastern tribes head for home. But when they reach the Jordan, they build a great, big altar – big enough that word of it reaches the western tribes in record time – and news of the giant altar is not well-received. Fearing that idolatry is already rearing its ugly head east of the Jordan – Joshua prepares for the possibility of civil war (Verse 12).

But before they march against their own, Phinehas, son of the high priest Eleazer, takes a  contingent of princes from the western tribes and sets out to confront the eastern leadership in Gilead (Verses 13-14).

You see, Phinehas knew a thing or two about confronting rebellion. In Numbers 25, the Israelites brazenly defiled themselves with the Moabites. God responded with a plague that quickly wiped out 24,000 Israelites. And God Himself credited Phinehas with turning back the rest of His wrath by squashing the rebellion. But the price had been high, and this time, Phinehas was determined to stop the rebellion before it began.

But in his confrontation, Phinehas offers more than a rush to judgment – he offers constructive accountability. In Joshua 22:19, Phinehas tells the eastern tribes that they still have a home west of the Jordan River, and if the temptations of pagan culture are too strong on the eastern banks, they can join the other tribes on the distant western bank.

Thankfully, the intentions of the eastern tribes prove to be true and they welcome accountability. They had not turned to idolatry, nor had they violated the structure of worship outlined in Leviticus 17:8-9. Rather, they had built a memorial to remind their children to follow the Lord (a way of holding themselves accountable). And with so much distance between their territorial inheritance and the tabernacle at Shiloh, they had given themselves a visual of their spiritual inheritance.

Phinehas returns to Shiloh with good news, and the swords of the Israelite army are sheathed. But the trip was not a wasted one, as iron sharpens iron, and the commitment of all twelve tribes to serve the One True God was confirmed and strengthened. Being accountable to each other served them all well.

Accountability is your friend. True friends will hold you accountable to God and His Word. And they are the company that is truly worth keeping.

Do you have a structure of accountability in place? Ask God to give you the kind of relationships that hold you accountable and help you to grow. Welcome accountability and walk in the light.