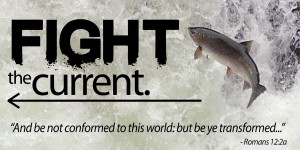 “And if it seem evil unto you to serve the Lord, choose you this day whom ye will serve; whether the gods which your fathers served that were on the other side of the flood, or the gods of the Amorites, in whose land ye dwell: but as for me and my house, we will serve the Lord.” – Joshua 24:15

“And be not conformed to this world: but be ye transformed by the renewing of your mind, that ye may prove what is that good, and acceptable, and perfect, will of God.” – Romans 12:2

I have some thoughts that keep playing over and over in my head, so much so that I’m writing this particular devotional in the wee hours of the morning. That makes me think it’s important. Maybe I take my own insomnia too seriously, but I choose to believe that God is trying to tell me (and maybe you, by extension) something worth hearing.

I’ve been impressed lately with the concept of living a radical, intentional life – a life that defies cultural expectations and actively pursues God’s expectations. It sounds like I’m stating the obvious, right? Of course, Christians are supposed to be different. And yet, looking at my own life, for all the changes I’ve tried to make by God’s grace, I still find areas where I simply default to the cultural norm.

Culture is like a raging river. It’s the current that flows through every aspect of our lives, and it’s so easy to be swept downstream without even knowing it. To better illustrate my point, I want to introduce you to some of the Bible’s greatest upstream swimmers:

All day, every day, you are faced with choices – choices in your home, your activities, the way you spend your money, and the way you spend your time. It’s easy to live life on autopilot, defaulting to culture, going with the flow, and floating downstream like everyone else (Romans 8:5-8, 13:14, II Timothy 2:3-4). That’s not how you run the race (I Corinthians 9:24, Hebrews 12:1-2). The race requires determination, intention, and constant consultation with God and His Word. It requires being different and moving in a direction that is often the opposite of the obvious. In short, it requires an upstream swim.

Live your life intentionally. Look for those places where you’ve settled for the cultural norm instead of seeking God’s better way. Let’s pray about how we can live a life that truly honors God in every way, and then, let’s go for a swim.

Keep flushing out those areas of your life where you need more of God’s way and less of the world’s way. Ask God to show you where He wants you to fight the current in our culture.