“And Lot lifted up his eyes, and beheld all the plain of Jordan, that it was well watered every where, before the Lord destroyed Sodom and Gomorrah, even as the garden of the Lord, like the land of Egypt, as thou comest unto Zoar. Then Lot chose him all the plain of Jordan; and Lot journeyed east: and they separated themselves the one from the other.” – Genesis 13:10-11

“Thou wilt shew me the path of life: in thy presence is fulness of joy; at thy right hand there are pleasures for evermore.” – Psalm 16:11 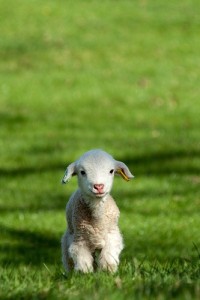 I am often overwhelmed by the goodness of God. When I think back on some of the foolish roads that I’ve gone down – when I remember the times that He pursued me, when I was pursuing everything but Him – I am just amazed at the patience, the mercy, and the extreme kindness of our God.

There was a time when I believed the lie that the grass is greener outside of God’s will. That’s why I so often stress the need to understand that God’s timetable is different from ours. As a young woman, I was forever hung up on my own timetable. I wanted to be married by 25, a mom by 27, and so on, and when God didn’t deliver those things according to my expectations, I soon set out in search of greener pastures.

I wonder if Lot’s wife thought the same way. We don’t know much about her, but one thing becomes abundantly clear in Genesis 19 – somewhere along the way, she fell in love with life outside of God’s will.

Her husband had started out on the right road. As Abraham’s nephew, Lot had joined his uncle on the journey out of Haran (Genesis 13:1). Maybe even then, he was in search of greener pastures than the life he was born into, but at least, he seemed to be following Abraham, who was certainly following God. But that actually brings up a very important point. Faith has to be personal, and your faith must be your own – not the extension of someone else’s. Ride the train of someone else’s faith, and your faith will easily go off the rails, especially when temptation comes on board. Abraham’s faith only carries Lot for so long, and when strife breaks out between the two, it doesn’t take long for Lot to start looking for the next big thing.

The truth is, we don’t hear about Lot’s wife in any of this. She’s not mentioned when her husband decides to move east (Genesis 13:9-12), or when he takes the life-changing step of pitching his tent “toward Sodom”. She’s such a silent partner in the destruction of her family that we don’t even know her name (Proverbs 14:1). But her restless and worldly heart  is revealed in two brief, but powerful statements (Proverbs 14:12, John 15:19, I John 2:15).

The first is in Genesis 19:26, “But his wife looked back from behind him…” Lot had lingered in leaving Sodom and Gomorrah behind, according to verse 16, so much so that the angels took he and his wife and daughters by the hand, literally dragging them away from destruction. But Lot’s wife lingered all the more, bringing up the rear, and eventually directly disobeying the command to not look back (Verse 17). That look results in her immediate destruction, and sets the ultimate destruction of her husband and daughters (later in Chapter 19) in motion.

The second statement about Lot’s wife is made by Jesus, Himself. In Luke 17:32, He uses Lot’s wife as a cautionary tale for His disciples, and with the three little words, “Remember Lot’s wife”, He speaks to all of us who have to choose between a life in God’s will and a life of our own making (Luke 17:33).

Are you on the fence today? Does the world’s grass look greener to you than the prospect of waiting for God to show up? Make no mistake about it – the grass is greenest in the will of God (Psalm 16:11, 19:8-10, 23:2, Isaiah 54:1, 4). I cannot plead with you enough – don’t buy the lie that this world has something better to offer (Deuteronomy 30:19). Don’t think for a minute that you are deprived, or that you are missing out in some way. God’s plan is best. God’s timing is perfect. And if you stay close to Him, the things He has for you are more than you could ask for or imagine. Walk in His way. Wait on His will, and never, ever look back.

Know that God has not left your situation, and know that His plan for you is in motion – even when you can’t see it. Ask Him to help you to wait on Him, rather than running to the quick fix that the world has to offer. God is a good Father, a good Provider, and He is faithful.